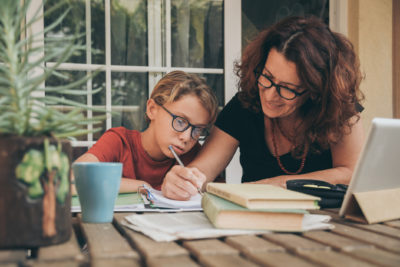 Is a divorce settlement agreement that mandates that the children attend school within a particular school district satisfied by the children being home schooled within that district? Maybe, held the Third Department in its June 17, 2021 decision in Matter of John U. v. Sara U.

The parties were the divorced parents of two children (born in 2010 and 2012). They entered a separation agreement in October 2017, which was modified in September 2019. The agreement provided for joint legal custody and shared physical custody of the children. As is here relevant, it contained a provision that:

[s]o long as the [father] maintains a residence in [a certain school district,] the children shall continue to attend school within [that school district] unless both parties expressly agree in writing to change the schools of the children.

Prior to the 2019-2020 school year, the children had attended a certain public elementary school in that school district. The children had a religious exemption from vaccination. After a June 2019 change in state law eliminated such religious exemptions for students (see Public Health Law § 2164), and after the district’s denial of the mother’s requests for medical exemptions, the unvaccinated children were removed from their school in September 2019 and the mother began home schooling instruction at her home.

In November 2019, the father moved for entry of a final judgment of divorce, incorporating the agreement. That judgment was entered on December 27, 2019.

On January 30, 2020, the father filed an order to show cause and a petition in the Rensselaer County Family Court to enforce and modify the judgment. The father sought an order directing the mother to consent to the children receiving the required vaccinations so that they may attend public school in the school district in compliance with the terms of the judgment. Alternatively, the father sought to modify the judgment to grant the father final health care and educational decision-making for the children.

The mother moved to dismiss the petition. Family Court Judge Elizabeth Walshdenied each aspect of the petition. The father appealed.

The Third Department noted that it must first determine what the terms of the judgment of Divorce required. However, the appellate court determined that, as a matter of law, the stipulation was ambiguous; that the provision was not as straightforward as the father contended. A requirement that the children attend public school in the specified district was not the only reasonable interpretation.

As the Attorney for the Children noted, there is a difference between attending “within” versus attending “in” a school district; that even while home schooled, the children could be considered as attending school within the boundaries of the district.

Moreover, the Third Department found problematic the word “continue,” as in “the children shall continue to attend school within [that school district].” The children had attended a certain public school in prior years and up until approximately September 19, 2019. At that time, they were no longer allowed to attend without proof of vaccination or approved exemption (see Public Health Law §2164[7][a]). The father asserted that the children were attending public school at the time that the agreement was circulated to the parties. However, the children were being home-schooled by the mother at the time that the parties signed the agreement in late September 2019. The children were being home schooled when the father signed an affidavit in November 2019 seeking the entry of judgment incorporating the agreement, and when his counsel submitted a proposed judgment in November 2019, and when Supreme Court signed and entered the judgment in December 2019. The Court noted that under the circumstances, the disputed issue should have been raised in Supreme Court and resolved in 2019.

One reasonable interpretation of the provision is that the children must continue in their current school program as of the time the agreement was signed and the judgment was entered, which was home instruction by the mother. This interpretation was logical because the children could not “continue” to attend public school if they were not doing so at the time that the above actions were taken. As there were at least two reasonable interpretations of the school provision, it was ambiguous.

Nevertheless, the Third Department found that Judge Walsh erred in dismissing the enforcement petition. The Court noted that the request for enforcement could have been addressed in multiple ways, including directing one or both parties to engage in certain acts, or modifying the judgment to authorize one party to solely make decisions on one or more topics to effectuate the terms of the judgment. However, to the extent that the petition could be viewed as independently seeking modification, the Third Department agreed with Family Court that the father did not allege a change in circumstances between the December 2019 entry of the divorce judgment and the January 2020 filing of the petition.

Moreover, the Court did not resolve the ambiguity by finding that agreement and judgment allowed for the home-schooling of the children. Rather, as the agreement’s school provision was susceptible to differing, but reasonable interpretations, an ambiguity existed that required consideration of extrinsic evidence relevant to the parties’ intent. Accordingly, Family Court should have denied the mother’s motion to dismiss the petition and should instead have proceeded with a hearing to determine the parties’ intent as to the school provision. The Third Department, therefore, remitted the matter to the Family Court for this purpose; and after doing so, to consider father’s request for enforcement.