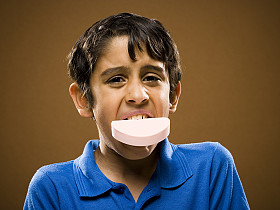 On October 27, 2011 the Appellate Division, Third Department, affirmed the April 21, 2010 Order of Broome County Family Court Judge Mary Connerton switching primary physical custody of their 8- and 10-year old children from the mother to the father. The parties continue to share joint legal custody.

In Brown v. Brown, The appellate court determined that the Family Court’s order was supported by a sound and substantial basis in the record. Evidence regarding the mother’s forms of punishment, which in part led to an indicated report of inadequate guardianship, was sufficient to show the change of circumstances necessary to support the father’s application for the change of custody.

The mother acknowledged that she put liquid dish soap in the children’s mouths on multiple occasions to punish them. There was some proof that she or her boyfriend used enough soap to make bubbles flow from her son’s mouth on one occasion.

Other forms of punishment that the mother used included making a child stand in the corner for hours at a time and refusing to allow her daughter to speak for at least several days, possibly an entire week, with a monetary penalty imposed for every word that was uttered.

The appellate court noted that the mother was not very engaged with the children, neglected their dental care, drove them in her vehicle when she did not have a driver’s license and caused them to be late for school because she overslept. The Family Court considered these deficits in the mother’s parenting abilities and weighed them against the father’s strengths and weaknesses as a parent, finding that the children’s best interests would be served by transferring physical custody to the father.

We have come a long way.  In 1956, the Lyme, Connecticut Board of Education felt that the action of a teacher who washed out a boy’s mouth with soap was not a violation of School Board policy. In 2004, a Rochester, New York teacher was suspended for washing a boy’s mouth out with a dab of soap after he shouted an obscenity at a classmate.

In 2009, a Palm Bay, Florida woman and her boyfriend were arrested for child abuse after the couple washed out their 8-year-old daughter’s mouth with soap for swearing (they let it remain there for 10 minutes). The girl eventually vomited and was taken to the local hospital, where the staff called the police.

I have no doubt that there is a substantial parent population who believe that grandma’s tried and true remedies were effective and are not abusive. Memo to parents: when child protective services makes an indicated finding of abuse or neglect, there will be severe consequences for not following a caseworker’s instructions and then lying about it.